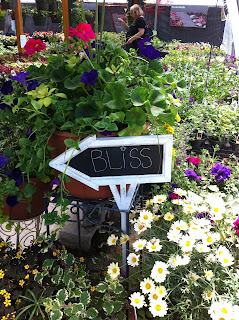 Yesterday I was at Petrasko Bros picking up some bedding plants, and of course I had to get a picture of this sign. It just shows how Manitobans feel about spring and summer, after six months of the white stuff on the ground. This year actually was pretty good, spring was early and we had some amazingly warm days in March and April. But now we have local asparagus (yes, I know it's June. We're in the NORTH here, people). We have local greenhouse tomatoes and cucumbers from Greenland Gardens. We are fortunate to have local mushrooms year-round from Loveday Mushroom Farms, and we currently also have local onions (of which unfortunately I don't know the provenance - but I trust Eatit.ca when they tell me something is Manitoba-grown). I've also been picking up local produce and organic baby veggie plants at the Red River General Store. A bit of a drive, but so worth it. 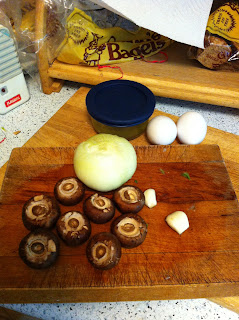 So, on to our dinner the other night. Sometimes we are fortunate to have pickerel or northern pike from the lakes of Northern Manitoba, but this was a vegetarian one, with free-run eggs from Nature's Farm in Steinbach. The garlic is not yet local, but I can't cook without garlic. Sorry. I'm not sure why I put the container of tomato sauce (homemade - that's another post) in the picture, maybe I was planning to use some, but in the end I didn't.

Paleo purists will complain about the bag of bagels in the background. All I can say is that my kids are not there yet. Baby steps.

Anyway, we had two main dishes - a mushroom fritatta, and of course, this time of year, we must have asparagus.The cooking oil of choice in paleo cooking is coconut oil, not local, alas. With global warming, though, who knows? Coconut palms at Portage and Main ... 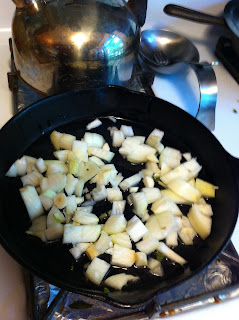 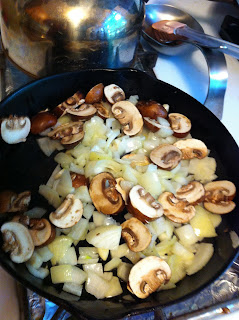 These pictures are mostly just an excuse to show off my beautiful cast-iron pans, which I bought at Pollock's Hardware Co-op, a beautiful place in a beautiful city. Once you start cooking with cast iron, you will never want to go back to those nasty Teflon non-stick pans. Ditch that toxic cookware, people! 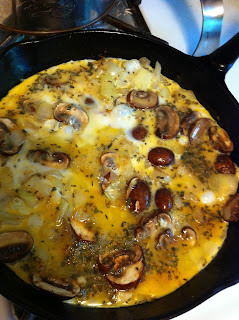 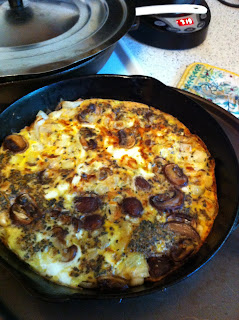 Anyway, you heat up your coconut oil, saute your onions and garlic until they are transparent but not brown, then add your mushrooms. Yum. Your kitchen smells good. You scramble up your eggs, add a little oregano, basil and thyme (very shortly those will be extremely local, from my garden!). Salt to taste. Add to your pan, turn down the heat, cover and let it cook merrily away. You may have to brown the top under the broiler, if your fritatta is too big to flip. I'm a wimp that way. 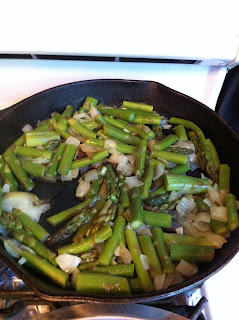 As mentioned, all meals this time of year must include asparagus, on pain of displeasing the Locavore Gods. So here's the braised asparagus dish that went with the fritatta. Start onions and garlic the same as before (although I think I may have used butter instead of coconut oil for this - anybody got a source for local organic butter??).

I think I added a little salt, as well. Fresh, local asparagus does not need any enhancements, in my humble opinion. The flavour of asparagus is what's called the fifth flavour (not sweet, salty, bitter or sour). I don't buy imported asparagus because I really don't think it can stand up to travel. So this time of year is especially precious to me.

So, here is the final product. I'm still learning about food photography as well as cooking and blogging, so bear with me. It was yummy, though. 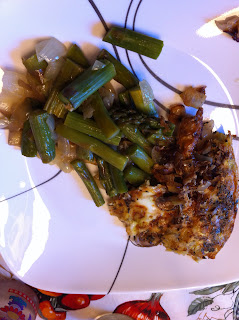 I would love to see what you are cooking up this time of year!

Where do you all come from?